Editor’s note: “From the Fishbowl” is a series of short articles by U.S. National Judge Randy Connell, and it is intended to educate competitors about commonly misunderstood or little-known rules of formation skydiving. References will often be made to the Skydiver’s Competition Manual (SCM).

At the USPA Board Meeting in February, the USPA Competition Committee approved changes in some of the rules in the Skydiver’s Competition Manual (SCM) governing judging procedures for formation skydiving (FS), vertical formation skydiving (VFS), and canopy formation (CF). Let’s take a look at these new rules and their history, and how they are different in the U.S. than they are at the international competition level governed by the International Parachuting Commission (IPC).

First, here’s a quick look into the history of these rules. Until 2012, FS judges were highly restricted on how many times they could watch each skydive, and what exactly they had to look at, before deciding on a score.  They could view a given skydive a maximum of three times at full speed, and they had to view the entire skydive each time.

This method is not exactly efficient if you don’t need to see the whole jump–for example, if you only need to clarify if a single transition was a bust. Having to watch all 35-50 seconds of a jump once or twice more rather than just three or four seconds doesn’t seem like a large problem until you multiply it across several hundred scored jumps per event. By the end of the day, this inefficiency adds up to several extra hours and significantly increased fatigue and potential for error among tired judges trying to get scores out to competitors as soon as they can.

In 2011, a waiver to the rules was granted by the USPA Competition Committee to allow the judges to use slow-motion playback if needed and to allow them to view only the questionable parts of a skydive (cueing). In effect, the judges were free to use any technological means available to arrive at the true, accurate score quickly.  At the 2011 Nationals, this proved to be an effective, efficient and very accurate method.  The benefit to the teams was especially apparent on the launch, where it is not uncommon for a grip to slip off screen or go flat, resulting in a bust.  Slow-motion allowed the judges to see, and “save,” a lot of launch points.  But there was a consensus that if the judges had to slow down the video too far, the team was not meeting its obligation to show the point to the judges.  In the U.S., all parts of the waiver became part of the rules moving into the future, with one exception that we will come to.

However, the IPC chose not to adopt the full changes.  Their rules allow judges to watch the video of each jump at normal speed to determine points in time a maximum of two times. Only on the third viewing are reduced speed and cueing allowed.  Further, the reduced playback will be selected by the chief judge at the start of the event and the same reduced speed must be used on every reduced speed playback. Judges in the U.S. can vary playback speed as needed.

One exception in the U.S. rules applies if the speed of the draw indicates a potential world record; in that event, that round of the Open class will be judged in accordance with the IPC standards (five judges vs. three in the U.S., and under IPC playback rules). This will allow a team at the U.S. Nationals to set a world record as otherwise the IPC, who handles ratification of world records, would not recognize a world record judged under different rules than their own.

Moving into the future, I think the U.S. rules are going to prove to be the most effective and efficient, but only experience with both rule sets will tell us for certain.

Author’s Note: The USPA Skydiver’s Competition Manual will not be republished until May 2011, so these changes are not yet in the manual as of this writing. 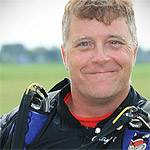 About the Author: Randy Connell

One Reply to “Recent Changes in Judging Procedures”