“Airmanship is the consistent use of good judgment and well-developed skills to accomplish flight objectives. This consistency is founded on a cornerstone of uncompromising flight discipline and is developed through systematic skill acquisition and proficiency. A high state of situational awareness completes the airmanship picture and is obtained through knowledge of one’s self, aircraft, environment, team and risk.” ‑‑http://www.skybrary.aero/index.php/Airmanship

Airmanship is a trait that we as skydivers should aspire to master, particularly with relation to our canopy flight. As with a pilot being aware of a powered aircraft’s abilities, the environment in which it operates, and of his/her own capabilities, we also must possess the same type of awareness and discipline when flying our canopies in order to fly safely. An aircraft pilot has many tools to help fly safely, including (sometimes) a co-pilot, radio/air traffic control, radar, and the ability to power down and up and go around to avoid airspace conflicts. We as canopy pilots do not have these luxuries. Takeoffs are optional, but landings are mandatory and imminent. We need to rely on our own skill and the awareness and skill of others to avoid airspace conflict.

We need to rely on our own skill and the awareness and skill of others to avoid airspace conflict.

So how can we be better canopy pilots (airmen/women) and safer airspace users? By developing an intimate understanding of our environment and striving to obtain a professional mastery of our knowledge, actions, and learning. Improving airmanship takes effort! Make the effort to improve and learn on every jump.

We need to fully understand parachutes and parachuting to be safe, effective canopy pilots. Do you completely understand your parachute systems, emergency procedures, canopy flight characteristics, and operating limitations? Do you know how meteorological conditions affect your parachute? (such as wind strength, turbulence, updraft/downdraft, and convection, just to name a few) How do they affect your flight and that of fellow jumpers? Do you understand, or are you aware of, your dropzone environment, our freedoms and limitations (regulatory restrictions, local rules, exit order, landing areas, hazards, etc.) and the challenges they pose to our airmanship? Most rules are not there to limit us, but to ensure we all have a safe environment to work and play in.

Having sound airmanship helps mitigate risk and sets the conditions for a safe airspace in which we can enjoy canopy flight. Identify the risks to define your limits (note: they may not be the same as other people’s limits) and thereby increase your personal safety. What are the risks on this skydive, you may think to yourself? The risks may include but are not limited to:

Identify the risks to define your limits (note: they may not be the same as other people’s limits) and thereby increase your personal safety.

All of these risks can result in injury or worse due to unsafe actions by ourselves or others. 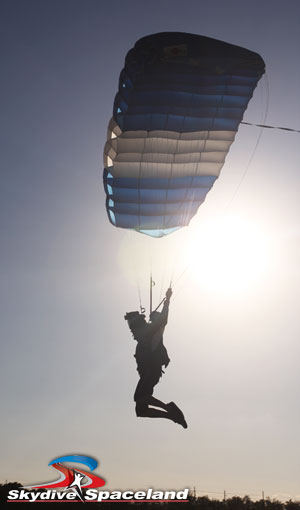 Once we identify risks for a jump, we can create contingency plans to mitigate them (just like your emergency procedures). A simple way to think of this is prior to takeoff, ask who is doing what on the jump and look at the size container they have or better yet, ask what they’re flying to get a rough idea of what to expect under canopy. While under canopy, constantly scan all around you and identify all the other canopies in the sky with you by color, size, speed, and position relative to you (high, low, left, right). You will know some by sight, while others you will just be able to observe in flight. You are now actively and continuously assessing your airspace (smart!).

Scenario: You are flying a cross-braced 90sq ft canopy. You have opened safely, stowed your slider, moved to the holding area, and are now at 1200 ft, looking to enter the pattern. You spot a canopy below you.

Now think to yourself the following questions:

That’s Bill, a known culprit for poor landing patterns by spiraling down past other canopies, then floating in brakes to land at his intended point.

Continuing his usual erratic flight through the pattern, cutting me off.

Once you answer these simple questions, you have recognized the threats and begun to prepare contingency plans. Likely, you will fly to stay far from Bill, allowing you to avoid the threat, fly a safe pattern, and land in a place of your choosing. You are using good airmanship to combat poor airmanship.

Scenario 2: You are flying a lightly loaded 190 sq ft canopy. You have opened safely, stowed your slider, moved to the holding area, and are now at 1200 ft, looking to enter the pattern. You spot a small cross-braced canopy nearby and above you.

Now think to yourself the following questions:

That’s John, known to spiral down past other canopies at any altitude to swoop at all costs.

Velocity 90 (or look at size, speed, color, if you do not recognize it).

Spiraling in the pattern, possibly overtaking and colliding with me from behind and above.

With your answers, you have recognized the threats and begun to prepare contingency plans. Stay far from John by allowing him to pass you up high (much safer than down low where everyone is closer together and has less altitude to deal with problems). You might fly wide and even apply some brakes and kick your feet to communicate that you are letting him by. Again, you are using good airmanship to combat poor airmanship.

We all know a Bill and a John, who fly like they are the only ones in the sky. They are often unaware of their surroundings during flight and often after touchdown (i.e., not checking back up the line of flight for other canopies after landing). They are dangerous to all of us. Don’t be that guy!

Stay tuned for part 2 on skills!

About the Author: Ken Stone

Ken Stone completed 26 years of service with the Australian Army, serving with the paratroops and Special Operations Command. He completed several postings to the Army Parachute School, during which time he developed, organized and conducted all freefall training for the Australian Army, as well as Research and Development in support of the Army’s parachute capability. Ken holds Australian Parachute Federation AFF, tandem (Sigma and Strong), Display Pro, USPA coach, AFF, Tandem, and PRO ratings. He has worked for drop zones in Australia, Fiji, and the USA.