Remember the Smokey the Bear public information campaign with the slogan, “Only YOU can prevent forest fires?” The idea was to remind us that we all bear personal responsibility for avoiding this dangerous situation. (See what I did there? 🙂 )

Flying parachutes puts us in a similar situation that requires each of us to take personal responsibility for safety–for ourselves, other jumpers on the load, people on the ground, and for this article’s focus–aircraft.

Worldwide, we have seen several jumpers strike aircraft on the ground over the years, with two notable incidents just this year at other U.S. skydiving centers. Landing on or striking an aircraft can have major medical and financial consequences to you, the pilot, and the airplane, especially if the props are turning. This is a situation no one wants!

Look Out for the Spinny Things

Why do we have to avoid aircraft, you might ask? They have engines, they can fly around us! True, as long as they are in flight. However, they are not at all nimble on the ground, so they have a much harder time avoiding skydivers when they are taxiing on the ground, landing, and taking off. Also, the pilot can’t see what’s descending at him/her through a solid cockpit ceiling. It’s much easier for a skydiver flying a parachute to avoid an aircraft on the ground than vice versa.

The good news is that aircraft are generally quite predictable, much more so than many skydivers! 🙂 We know where aircraft will be (taxiways, runways, and the airspace above the ends of runways) and where they are going. That makes it much easier to avoid them if we just consider a few bits of knowledge about aircraft operations.

Aircraft only operate in very specific areas on airport grounds, including runways, taxiways, and parking pads/fueling areas. These are a very small percentage of the land on an airport, so we should be able to stay away from them without too much trouble.

At some Spaceland dropzones and likely many others, the paved runway may not be the only runway. At Houston and Dallas, our aircraft will often land on the grass runway that’s right next to the paved one since it reduces wear on the tires compared to landing on pavement. Consider the runway area to avoid as the paved runway and at least its width to either side. (That way you don’t even have to remember which side it’s on!)

It’s more challenging, but no less important, to avoid flying over the runway below 1000 feet when the runway is in use or about to be in use. If you’re not sure, always assume the runway is in use! In addition to normal take-offs and landings, aircraft sometimes have to perform a “go around,” resulting in the aircraft potentially NOT being low to the ground/near the runway surface as it travels across the runway area. Also, our beloved Texas humidity (which isn’t specific to just Texas, of course!) can lead to the windshield fogging over just prior to landing. In this scenario, with the pilot losing forward visibility, he/she would then transition to flying “on instruments.” In this scenario, the pilot has no way of seeing and avoiding a skydiver that may have errantly flown into airspace designated for the aircraft.

After opening, do not loiter near the ends of the runway, as aircraft will be using that airspace for departures and approaches.

When crossing the runway on foot, be sure to check both directions, looking all the way to the end of the property and then upwards, checking for aircraft on final approach. Never cross the runway in front of an aircraft; you can cross behind it (assuming another airplane isn’t behind it also, as can happen when we run multiple aircraft), but never cross in front. A good guideline to follow is to STOP, LOOK, and LISTEN for aircraft before crossing the runway.

By far the best way to avoid conflicts with aircraft is to be aware of where they will go by using the above information. It’s even a good idea, once you have deployed your parachute, cleared your airspace, and done your control check, to take a quick look down at the airport to see if any other aircraft are loading jumpers or taxiing around. You’ll also want to check the arrow for the landing direction and wind sock to tell you what winds are doing, since winds can change after you take off. This will help you verify or adjust your landing pattern plan, and predict where the aircraft will go so you can go somewhere else. As Mr. Miyagi said (more or less), “The best defense is no be there.” 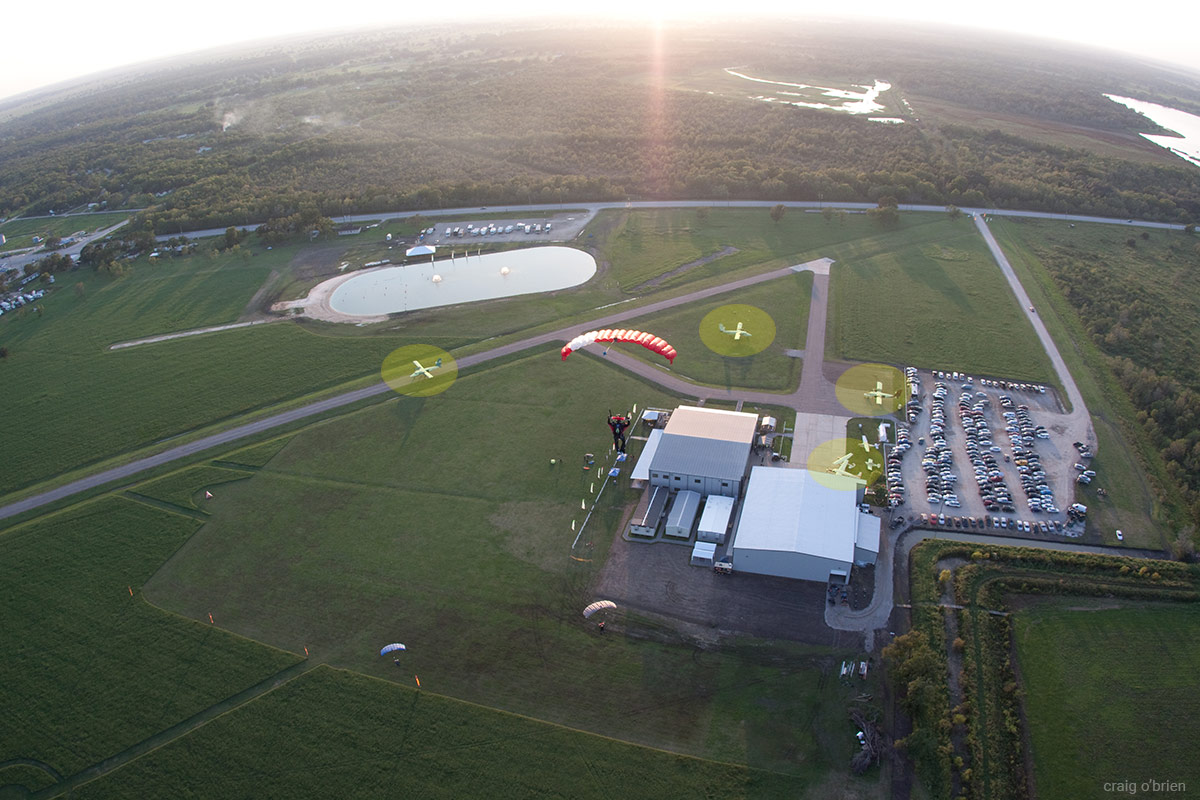 The earlier you see an impending aircraft conflict, the less you have to do to avoid it because you have so much more time and altitude to work with. A small turn up high will change your pattern and landing location much more than waiting until you’re down to a few hundred feet off the ground on final.

However, newer jumpers in particular have so much going on mentally as they learn this new sport that awareness is in shorter supply than with more experienced skydivers. If you do not become aware of a potential aircraft conflict early enough to avoid it easily, you may have to take evasive maneuvers lower to the ground.

The good news is that as far back as Dive Flow 2 in the Skydiver Training Program, you started learning how to perform braked turns in order to change your heading/landing location with minimal loss of altitude. In Dive Flow 16, you learned about using front risers to steepen your glide when you need to land shorter (best done up high to allow the canopy to recover speed for the landing flare). You have all the skills you need; you just need the judgment to know when to apply them.

There’s one other item to consider when landing your parachute on an airport, and that’s the turbulence behind any aircraft that is running. Whether stopped, taxiing, taking off, or landing, an aircraft with a running engine creates turbulence in a widening cone shape behind it. You know this from the prop blast you feel while boarding the aircraft. Logically, then, landing a parachute behind or even almost behind a running aircraft is a pretty bad idea because turbulence can radically affect your parachute’s flight or collapse it. Don’t go there.

Target Fixation is Your Enemy

Sometimes, we get so fixated on an obstacle that we end up flying right at it (target fixation). This isn’t unique to skydiving; it happens with tasks such as driving as well. We tend to go where we look, and this is precisely how jumpers sometimes end up striking the lone windsock in an otherwise clear 130-acre field, for example; they’re so nervous about hitting it that they can’t take their eyes off of it!

If you are concerned about an obstacle, whether it is an aircraft, wind sock, or whatever, check its position and then focus on a reasonable area where you would rather land. Feel free to glance back at the obstacle from time to time to see if you need to adjust your flight further, but don’t stare at it. Keep checking your airspace for other jumpers and focus instead on where you want to go.

Pilots will always do their absolute best to avoid conflicts with jumpers, but jumpers can help pilots out a lot by doing their part. If you have any questions about how you can work better with pilots to increase safety, feel free to ask them! They are always happy to talk about safety when they are on a break from flying, preferably with a beer in hand after the last load. 🙂